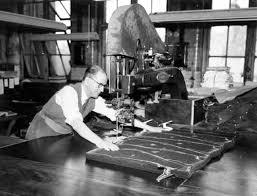 Until the 1850's clothing was cut and mostly made by hand, it was relatively expensive and only for the most affluent. John Barran saw a wood cutting machine and then thought it could be adapted to cut multiple layers of cloth. He then opened the world's first ready to wear clothing factory assisted by his manager Israel Friend.

Very quickly the concept of off the peg tailoring grew in popularity and Leeds became the world's largest mens tailoring city.  I don't have a photo of the original machine but the attached photo from around the 1930's illustrates how the band knife works